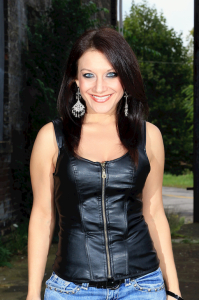 For Theresa Rose, music is the thread that seems to connect everything in her life. A visible force in the northeast Ohio music scene for more than a decade; Theresa’s voice and stage presence has made her a favorite among fans, musicians, the media and people in the music industry.

For the past 5 years, fans have known her as the female lead singer of Caliber, one of Cleveland’s most popular country bands. Caliber is a favorite among local clubs and festivals playing more than 60 dates each year. In addition, with Caliber, Theresa has opened for many national Nashville touring acts including:

Theresa released her first solo CD in 2013, “Hold On” which was a collection of originals that well received among fans and the media. For her second release, Theresa wanted to push her musical boundaries beyond her musical comfort zone. She wanted something that was more personal and reflective of her changing and expanding musical taste.

All that came together when she found her perfect partner in music and life… world renowned guitarist Neil Zaza. Together they have crafted a collection of songs that go well beyond the boundaries of traditional country music and explore the alt-country rock genre with fresh ideas and sounds.

“I’m very excited about the first single to be released off the EP. It is called, MY HOME,   and will be featured in the upcoming independent film, PROVIDENCE,” explains Theresa. “This song was written as I realized that I’d fallen for Neil and at the exact point in time that we were moving forward through this crazy world as a team.”

The rest of the EP contains a collection of songs that are personal and focus on where Theresa is currently in her life. She believes that many listeners will be able to relate to these songs and enjoy the direction she is taking with her solo career.

Theresa plans on performing at a number of solo shows with her new backing band during the next year and is currently booking a number of dates in the area. Her first show as a solo artist will take place on January 28th at the Kent Stage as she and her new backing band will open for Nashville artist, Phil Vassar. Accompanying her will be guitarist Neil Zaza and a band other local veteran musicians.

Her new solo EP, “Never Learn”, is expected to be released in late 2015 and will be available on her website, iTunes and other music distribution sites.